You Are Not Alone
Elizabeth Ostler

Moroni. He stands atop most of our temples in gold blowing a trumpet proclaiming the restoration to all. He mentored the young Joseph Smith through visitations – directed him and refined his character. He witnessed the genocide of the Nephites, protected the golden plates and spent his last days in hiding writing the things of most import for the benefit of the Lamanites.

I find the first chapter of his own book gut wrenching and inspiring. With honesty and vulnerability, Moroni begins 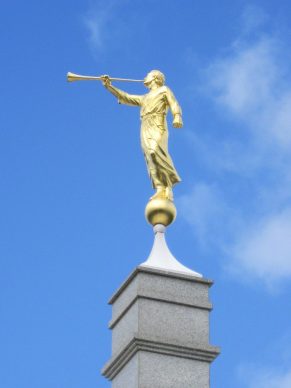 his contribution to the golden plates,

“Now I, Moroni, after having made an end of abridging the account of the people of Jared, I had supposed not to have written more, but I have not as yet perished; and I make not myself known to the Lamanites lest they should destroy me” (Moroni 1:1).

He has finished the work his father, Mormon, started. The journals of diverse people are abridged into one collection – the golden plates. He anticipated that he would’ve already met the same fate as his fellow believers, death.

Moroni is on the run, not staying in any place long enough to be found. He as lost his family, his friends, his people, his home. He is hunted because he is a believer.

I wonder what it was like for the young Joseph Smith when he translated these passages, to learn the story of the personage who prepared him to receive the golden plates. What did he learn about God’s relationships with His prophets? Did he feel a kinship to Moroni when he was suffering in Liberty Jail as the early saints were being hunted? Similarly, I wonder if our pioneer forefathers and foremothers were edified by these verses as they buried their loved ones, abandoned their homes and crossed the plains. Likewise, can you, in some way, empathize with Moroni? Do you know what it is to feel alone? To grieve? To live in fear? To live with uncertainty?

From a place of aloneness and grief, Moroni writes a few things,

This is a different tone and perspective than the one found in Mormon 8, where Moroni was seeking godly vengeance. Witnessing horrific events have changed him. Now, he chooses to write sacred things not that his enemies will be condemned, but that, in the future, they will be sanctified. Furthermore, he does not call them enemies, that’s my wording, he calls them his brethren. Ah!

I have yet to obtain this level of grace, mercy – this level of Christ-like living. I’m struggling to find my way to Christ-like relational living. I’m like Moroni of Mormon 8. Just yesterday, I woke up on the war path wanting to verbally accost my Lamanites. I didn’t. Nonetheless, I have a ways to go before I’m calling them brethren. This is reason 1,845,124 why I am not the latter-day emblem. But Moroni is. As I study him, it seems deeply appropriate that he would become the emblem to our Mormon community and to the world. Moroni exemplified the best of humanity in the face of the worst of it. He teaches me that though I may lose everything, all is not lost when I believe in Christ.

In the following four chapters, Moroni focuses on ordinances: first, how to bestow the gift of the Holy Ghost; then, how to ordain priests and teachers; and finally, how to administer the sacrament. Moroni is leaving behind the essential ordinances needed to cultivate and sustain a covenant relationship with God.

He then gives instruction on church membership, baptism, repentance and worship using as an example the Nephities’ meetings after Christ’s visit.

Though Moroni is speaking specifically about church meetings, I want to apply this to our everyday living. I have felt prompted/inspirited to preach, exhort, pray, supplicate, sing – and to advocate. This call to be an activist has enriched my life by giving it meaning and purpose. It has, also, led me at times to feel isolated and alone. Sometimes, I’m the only one in a family and/or social circle with a specific political, religious, social justice belief. In these moments I feel separate from those I want to be the closest to. Can you relate?

It was this desire for community in activism that brought me to the Mormon Women Project. MWP’s purpose is to show the breadth of what it means to be a Mormon woman. We are as diverse as the people of the golden plates, and in that diversity is belonging and our salvation. We do this best in our interviews. No matter how different or isolated you may feel, you can find an interview with a woman whose story will resonate with you. You are not as Moroni, you are not all alone.

Sometimes though, it is necessary to take action that will have you standing alone. You may have to be the lone voice that stands for human dignity, the voice that articulates concern for the direction a family, organization, nation is going, the voice that exemplifies Christ when no one else is. When you were baptized, you covenanted to take upon yourself the name of Christ and to bare one another’s burdens. Last year, Elder Nelson called on you, his sister, to actively participate in the building of the Kingdom of God. In these moments you can look to Moroni for courage.

From now on, when I look at the figure of Moroni on the cover of a Book of Mormon or atop a temple, I will see more than a great prophet of old glorified as an angel. I will see you next to me – both of us (all of us) with our voices and actions like trumpets building Zion in our sphere of influences. 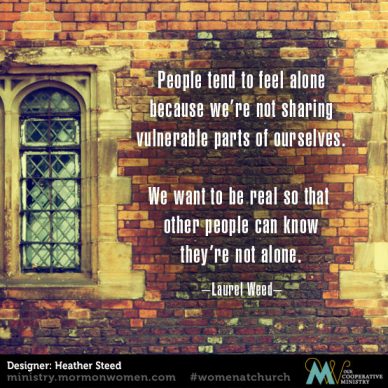 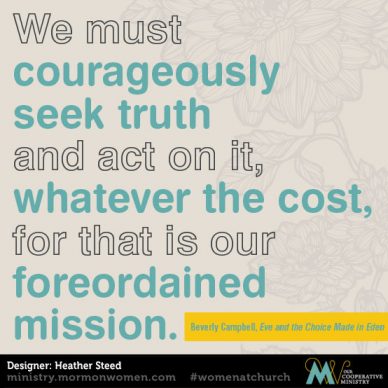 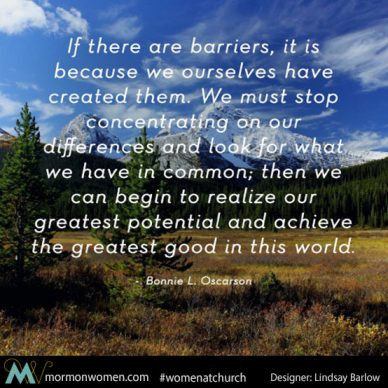 « Conversations in Plain Humility
I am Good »