As Joseph in Egypt

In 2000, Thérèse Kanyanga was living in the Republic of the Congo as a wife and the mother of seven children when her husband, Gilbert, mysteriously disappeared. Thérèse discovered he had been accused of treason and exiled to South Korea. For the next six years, Thérèse raised her children alone. In 2006, she was able to join Gilbert in Seoul where she was baptized into the Church.

Why did your husband move to South Korea while you and your family stayed behind in the Republic of the Congo?

At this time there was a meeting with the state council. Some members of the Zimbabwean military were present and they knew my husband. When they heard that he was going to be killed, they came up with a plan to help him. That night they freed him from the prison and put him on a plane to South Korea. Because of diplomatic relations between the Congo and Europe, the Zimbabwean military decided that South Korea would be the safest refuge for my husband. 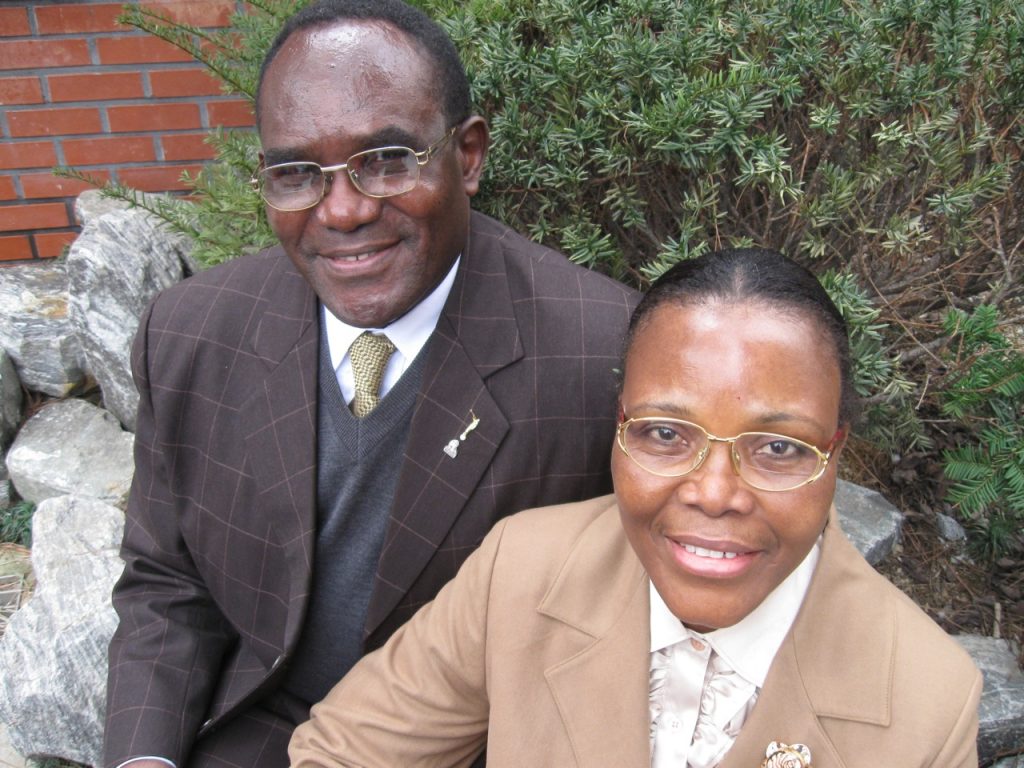 I had my seven children. At the time, the youngest was 11, and the oldest was 24. I told my children that I didn’t know where their father was. We were looking for him but we couldn’t find him. There were many tears that were cried, and we were all very sad. I fasted and prayed a lot during this time. My unshakable faith was and is in my God and in His son Jesus Christ, our Savior. But I was also weeping because I was torn by the darkness of my husband’s mysterious disappearance: Was he dead or alive?

My husband disappeared in November. When he arrived in South Korea he contacted a friend in the Congo and sent him to find me. At the end of December, this friend found my oldest daughter and told her about the situation. When my daughter called to tell me that my husband was alive, I was very relieved and thankful to the Lord because at that point I didn’t know where he was or if he was even alive.

Were you able to support your family during those years your husband was exiled?

My husband’s work had provided our income. Now that he was gone we had very little money to live off of. We had a deposit saved up but that money ran out quickly. I had no money to pay for the rent, food, or my children’s schooling so I started to sell things. I sold fry bread on the streets to support my family, so that we could survive. At this time the children weren’t able to attend school. It was the most difficult, sad, bitter experience of my life: Being a mother with seven children in my charge to feed and console.

I started to sell things. I sold fry bread on the streets to support my family, so that we could survive.... It was the most difficult, sad, bitter experience of my life: Being a mother with seven children in my charge to feed and console.

Eventually, my husband was able to send small amounts of money over from South Korea to help us. He joined a Christian prayer group and some of the members collected money for him. In 2003, three years from the time he left the Congo, he received his refugee status from the South Korean Ministry of Justice which allowed him to work. He began to lecture as a professor, as he had done in the Congo, and made money from his lectures. For the next two years he sent much of this money back to Africa to help support us. It was during this time that he joined The Church of Jesus Christ of Latter-Day Saints.

How was your husband converted to the Church?

My husband met a senior missionary at the subway stop on his way home from church on Christmas Day. This was in 2005. They had a conversation and exchanged business cards. One month after meeting the missionary, my husband received a Book of Mormon in the mail. He was very skeptical of this book. He didn’t understand it. He reluctantly agreed to have a meeting with the senior missionary and his wife that week. During the meeting my husband wanted to tell them that only the Bible was the word of God. He was going to teach them! But he kept hearing the Spirit tell him, “Do not open your mouth, let the missionary teach you.” He obeyed the promptings of the Spirit and listened to the missionary tell him the history and purpose of the Book of Mormon. When the missionary asked him what he felt, my husband knew it was true. He was baptized two weeks later. 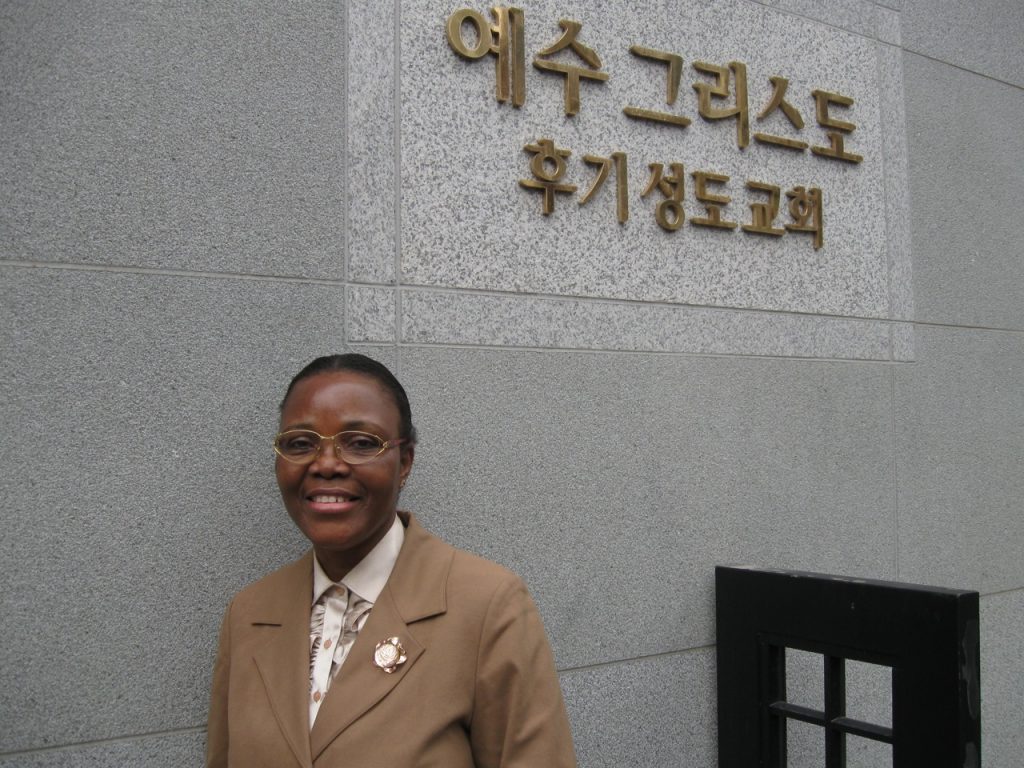 When I heard this news I expressed my profound gratitude to the Lord, who had heard my prayers, comforted my broken heart, and wiped away my tears. But I was faced with a new heartbreak: I could go see my husband, yes. I could witness that he’s alive. But I had to leave my children? I decided to pray, saying to my Heavenly Father, “Here I am, a poor woman, wife and mother torn between the love for my husband, whom we miss, and the love for my children. My children and I are alone with You, our last defense. Not knowing what to do, I place my trust in thee and my children under thy loving care. I go to meet again my dear husband, ‘the ghost’.”

When you were finally reunited with your husband, he introduced you to the Gospel. What was that experience like for you?

First, I felt joy in hearing the name of the church: The Church of Jesus Christ of Latter-Day Saints. Then my husband, as the pioneer of our family, testified to me. He told me how he had met the missionary at the subway station and how he had understood the truths in the Book of Mormon. He said to me, “Really, really it is the true church of God. Can you accept this?” The Spirit of God testified in my heart that this was the true church of God with his Son, the Lord Jesus Christ, as the Head. I told him I would join this church.

A few weeks later I was baptized by my husband, and I felt so much peace. I felt the love of God upon us because I had joined His true church. I felt very strongly that this was Jesus Christ’s church on the earth today, and I was full of joy. Being sealed to my husband in the temple some time later was further proof that this was the true church of God. He instituted the marriage covenant Himself in order for the family to be eternal. This is the love of the Lord.

How has your spiritual perspective changed since coming to Korea and becoming a member of The Church of Jesus Christ of Latter-Day Saints?

Since becoming a member of this living church, my faith in God has been strengthened, solidified, and is indestructible like a rock. It is the culmination of my many prayers. Our family suffered so much for those six years my husband was away. I asked, “Why was my husband sent away? Why are we here alone?” Now I think about what God told Abraham: “You live here. Go to another country. There I will bless you.” I think about God helping Joseph when he was sent away to Egypt. Joseph suffered much. He was in prison like my husband, and the blessing of the Lord came upon him. Ten years later we know why the Lord sent my husband to South Korea. All is the plan of the Lord. The Gospel is the Gospel of faith. Each of us knows how we joined the Gospel. Each of us knows how we met God. I testify that Jesus Christ is the Life, the Resurrection, my King, the subject of my faith. This is true. In the name of Jesus Christ I testify. Amen, yes, amen.

Favorite Hymn: “There Is Sunshine In My Soul Today”