Awakening to Our Duty
Elizabeth Ostler

To awaken to our duties as global, national, and church citizens.

Mosiah 29 focuses on the end of King Mosiah’s reign and establishing the ruling of Judges. Alma 1 to 4 details the Nephites’ struggles as they establish this new form of government and evolve as a civilization. They experienced priestcraft, dissension, war, righteousness, prosperity and inequity. In studying this lesson, I kept thinking about what it means to be a citizen.

For the purposes of this lesson, I’m going to use citizenship in its broadest form – to belong to a collective in a recognizable way (ie, legally, by covenant, by birth, by pledge, etc). Citizenship has duties associated with it. Namely, to participate in a way that ensures the success and/or sustainability of that collective. I can think of three ways we are currently being called upon as citizens: globally, nationally, and at church.

This is a presidential election year for many countries, including the United States. Citizens are being reminded of the importance of expressing their voices and desires by voting. Mosiah counsels the newly appointed judges, “…to do your business by the voice of the people” (Mosiah 29:26). The Church’s official statement on voting encourages members to be civically informed and to vote. The statement also reminds us that though we are united in building up the Kingdom we come from various backgrounds and experiences, therefore we will have varying political beliefs and this should be respected.[1]

Voting is something I’m passionate about. I believe there’s no excuse to not be a registered voter or an active voter. This is particularly true for women and minorities who have a history of being denied this right. Too many of our brothers and sisters were persecuted, harmed and killed pursuing the right to vote. We dishonor their sacrifice by not voting out of inconvenience.

Throughout history, Mormon women have been actively involved in the right to vote. In 1870, suffrage was approved in the Utah Territory, enfranchising “more than 17,000 women, the largest population of female voters in the world.” Emmeline B. Wells, fifth general Relief Society President, was a notable leader in the women’s rights movement. Her newspaper, Woman’s Exponent, was committed to “The Rights of the Women of Zion, and the Rights of the Women of All Nations.” Unfortunately, Utah women lost the right to vote in 1887 when the Edmunds-Tucker Bill was enacted. There was an outcry by Mormon women and national suffrage leaders. In 1895, Utah legislature drafted a new constitution with a suffrage provision which was approved by the U.S. Congress the following year. In 1896, Utah citizens elected the nation’s first female state senator, Martha Hughes Cannon. She ran against several men, including her own husband. That same year, two women were also elected to the Utah House of Representative.[2]

When we awaken to our duties as citizens, we continue the work of our foremothers to ensure “…that this land be a land of liberty and every [person] may enjoy [their] rights and privileges alike…” (Mosiah 29:32).

After Alma is elected as chief judge, the Nephites have a period where the believers live righteously. They don’t esteem a class of people above another and labor and study together. “…[T]hus they were all equal…” (Alma 1: 26). They are a charitable people. “And thus, in their prosperous circumstances, they did not send away any who were naked, or that were hungry, or that were athirst, or that were sick, or that had not been nourished; and they did not set their hearts upon riches; therefore they were liberal to all, both old and young, both bond and free, both male and female, whether out of the church or in the church, having no respect to persons as to those who stood in need” (Alma 1:30).

During the April Conference, President Linda Burton called us to be global citizens. She spoke directly of the refugee crisis, reminding us that our brothers and sisters stand in need and that we have covenanted to bear one another’s burdens. Just as the Nephites had “no respect to persons as to those who stood in need,” we have a duty to give relief in whatever capacity we are able. Rolling out the #IWasAStranger initiative, President Burton said, “It is our hope that you will prayerfully determine what you can do—according to your own time and circumstance—to serve the refugees living in your neighborhoods and communities. This is an opportunity to serve one on one, in families, and by organization to offer friendship, mentoring, and other Christlike service and is one of many ways sisters can serve.”

President Burton councils, “As sisters we make up more than half of the Lord’s storehouse to help Heavenly Father’s children. His storehouse is not composed just of goods but also of time, talents, skills, and our divine nature. Sister Rosemary M. Wixom has taught, ‘The divine nature within us ignites our desire to reach out to others and prompts us to act.’”

As we turn ourselves towards God, He turns us towards one another.

This year, I’ve had the privilege of attending two Young Women presidency trainings one taught by Sister Neill F. Marriott and the other by Sister Carol F. McConkie. A common theme in both trainings was a call for women to be vocal and fully participatory in our auxiliaries and in ward council. It reminded me of President Russell M. Nelson’s conference address, A Plea to My Sisters, wherein he said,

“My dear sisters, whatever your calling, whatever your circumstances, we need your impressions, your insights, and your inspiration. We need you to speak up and speak out in ward and stake councils. We need each married sister to speak as ‘a contributing and full partner’ as you unite with your husband in governing your family. Married or single, you sisters possess distinctive capabilities and special intuition you have received as gifts from God. We brethren cannot duplicate your unique influence.”

As we navigate this Earth school to the best of our ability, may we remember that we are part of collectives that are bigger than ourselves. Our voices, talents and sensibilities are needed in order for these collectives to flourish. May we be like the Nephites when, “…they were awakened to a remembrance of their duty” (Alma 4:3) and be citizens of our nations, the world, and our church.

A Citizen of the World, Camilla Smith

“Everyone needs a family and that tribe to give them strength, but then that strength should be focused outside of the tribe and community rather than trying to keep people huddled together. That’s really at the core of my religious faith.”

“If we don’t allow ourselves to look outside our own little world, we don’t realize how similar we are to each other.” 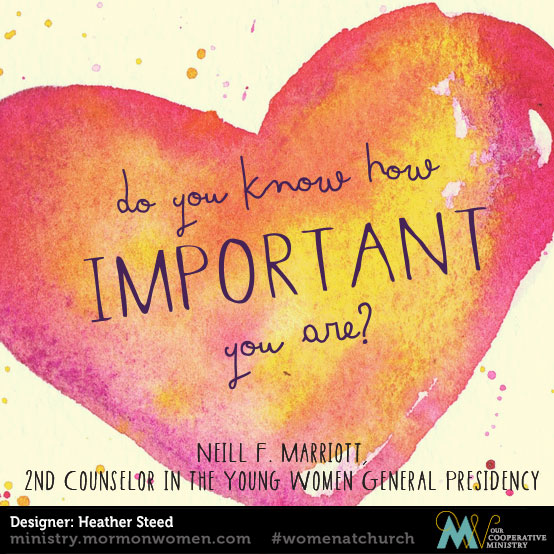 « Unity and Equality Through History and Faith
Fixer Uppers »