To find individual application in the faith and diligence of the collective history of 1 Nephi.

We tend to treat the first part of the Book of Mormon as the coming-of-age story of a single prophet, Nephi. There’s good reason for this: Nephi speaks from a strong first person perspective, and as he tells his own history, we see him growing into adulthood, learning how to receive inspiration from God, and eventually shouldering responsibilities of leadership for his small family and followers. It’s within the chapters of this reading (1 Nephi 19:23) that Nephi “liken[s] all scripture unto us,” and I hope that both men and women can relate to the individual story of Nephi, who found his personal place in God’s plan.

But the narrative of this reading is also a collective history, one that describes the establishment of a new branch of the house of Israel. Although there is a sad lack of individual women’s voices in 1 Nephi 16-22, when read more closely, this collective history includes men and women alike as vital members. Nephi’s individual story is set within a coming-of-age story of a covenant family of God, one that includes wives, daughters, and mothers.

Meredith Nelson’s post on Lesson #2 shows with beautiful clarity Sariah’s path from discouraged doubter to believer and testifier. Sariah expresses her fears in Chapter 5, but this is followed by her inspired recognition of the Lord’s blessings and her family’s purpose. She ultimately expresses her ratification of Lehi’s vision and of their journey. We don’t have a record of any other individual woman’s conversion to Lehi’s vision. But a similar spiritual process is collectively echoed eleven chapters later, when Nephi direct quotes the daughters of Ishmael. Their father Ishmael has just died, probably from the hardships of the journey, and their grief is intensified by their “much affliction, hunger, thirst, and fatigue”(1 Nephi 16:35). Like Sariah, they complain against Lehi. But also like Sariah, they receive a witness of the importance of this journey. This witness comes from the Lord himself. Nephi records in 16:39: “And it came to pass that the Lord was with us, yea, even the voice of the Lord came and did speak many words unto them . . .” At this crucial moment when the small family group is bereft of Ishmael’s patriarchal leadership, Nephi and Lehi do not speak in defense of their visionary plan. It is the Lord who speaks, and everyone hears.

What does the collective Lehite history teach us about prophecy and spiritual guidance?

Nephi and Lehi’s roles as prophetic leaders were important, but they could not fulfill this role as isolated individuals. In this, the Lehites are at a clear advantage over the people of Moses, who laments in Numbers 11:29, “would God that all the Lord’s people were prophets, and that the Lord would put his spirit upon them!” Nephi, possibly remembering Moses’ plight, begs his family to be receptive to the spirit, pleading with them to “inquire of the Lord” (1 Nephi 15:8).

It is in chapters 16 and 17, we see (in fits and starts) the people of Lehi beginning to do just that, seeking inspiration and understanding through their response to the Liahona, which is described by Nephi as an instrument for the collective group, “And it came to pass that when my father beheld the things which were written upon the ball, he did fear and tremble exceedingly, and also my brethren and the sons of Ishmael and our wives. And it came to pass that I, Nephi, beheld the pointers which were in the ball, that they did work according to the faith and diligence and heed which we did give unto them. And there was also written upon them a new writing, which was plain to be read, which did give us understanding concerning the ways of the Lord; and it was written and changed from time to time, according to the faith and diligence which we gave unto it”(1 Nephi 16: 27-29). The Liahona experience stands in marked contrast to Lehi’s solitary visions in that the collective family witnesses and interacts with the instrument (v. 27). Faith and diligence to this curious instrument is required of everyone (v. 28). Finally, in verse 29, the Lord gives the group understanding and insight into his will.

I’m told that women are good at thinking collectively, though I don’t know how fundamental this is to our nature. With a collective mentality, it can be easy to slip into a culture of thoughtless deference, an avoidance of individual agency. But the women of 1 Nephi did not simply defer. For this collective group to come into its own as people of God, each member had to become individually engaged, receiving and acting upon the word of God in faith and diligence. Can we as families, congregations, and as the larger body of the church be described in such a way?

In October 2003, President Hinckley confirmed this ideal collective mentality, a kind of collective that depends on and reaffirms the testimony of each individual. Speaking to the women of the church, he said “You know as I do that God our Eternal Father lives. He loves you. You know as I do that Jesus is the Christ, His immortal Son, our Redeemer. You know that the gospel is true and that heaven is near if we will cultivate it in our lives.” “To the Women of the Church.” Oct. 2003.

All Here Together, Bianca Morrison Dillard

I have a lot of questions, but I feel more comfortable and confident sitting with those questions. I don’t feel like I have to necessarily put them on a shelf and not think about them anymore. I can hold them and say, “This is my faith and these are my doubts, and it’s all here together, and I feel confident in the core principles that I am going to follow.” Another reason that I feel so excited about Mormonism is that Mormonism is sort of like the wish for more light, truth, and knowledge. Like the wish for more wishes! We believe in light, truth, and knowledge wherever it is found. It’s all a part of the Gospel, and I find that really exciting.

On Listening, Music, and What It Means to Be Human, Catherine Ramirez

Trust yourself. Believe in your dreams and proceed with as much faith and diligence as you can. Pray for guidance and express your gratitude for all the help you receive along the way. 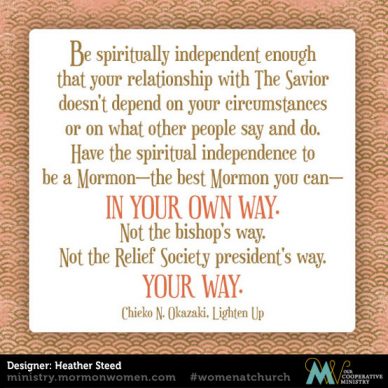 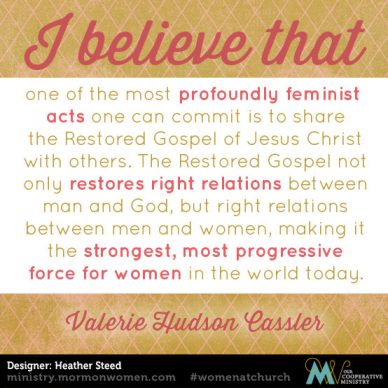