Bravery and Love of Family

The decisions that have shaped María Felipa García Pérez’s life haven’t been made because they were the easy ones, but because they were the right ones. Her love of family and love of the Savior have given her the strength to have difficult conversations with family about her baptism, to serve a mission, and then to leave that mission early when her mother became ill. When María met and married her husband “Mar” (Martín), he had already been suffering for more than half his life with the degenerative disease Rheumatoid Arthritis. Months after his death, she bears testimony of the ways in which the gospel built her courage and gives her the hope and promise of a forever family. (This interview was conducted in Spanish. Haz clic aquí para leer la entrevista original en español.)

How did you come to join the Church?

I learned about and joined the Church in 1989. One day, my mom was doing laundry and ironing and she met the Elders.  They asked if she wanted to listen to the lessons. When the missionaries came and shared their first lesson, my cousin hid. My mom said goodbye to the missionaries kindly, but she told me she didn’t want another appointment. But I felt something, and said, “I want to continue listening. If you don’t want to, you can tell them, I doubt they will be offended.” Then, my mom took the discussions with me. My father had already died and my paternal grandmother, who had always served in the Catholic Church, ended up in bed that year. I visited her every weekend asking my Heavenly Father for the courage to tell her. I was finally able to do it, and I said, “Granny, I’ve been baptized in the Church of Jesus Christ of Latter-day Saints.” She looked me right in the eyes and said, “What do you feel?” I said to her, “I know the Godhead that they’ve taught me about more than the one that I’ve learned in your church.” Then, she answered me and said, “If you feel it’s true, don’t be ashamed in front of anyone, don’t feel bad about what others think.” A week later she died. My mother was baptized a year after I was, but she was always afraid of her family so she only attended church when she was with me at my house. 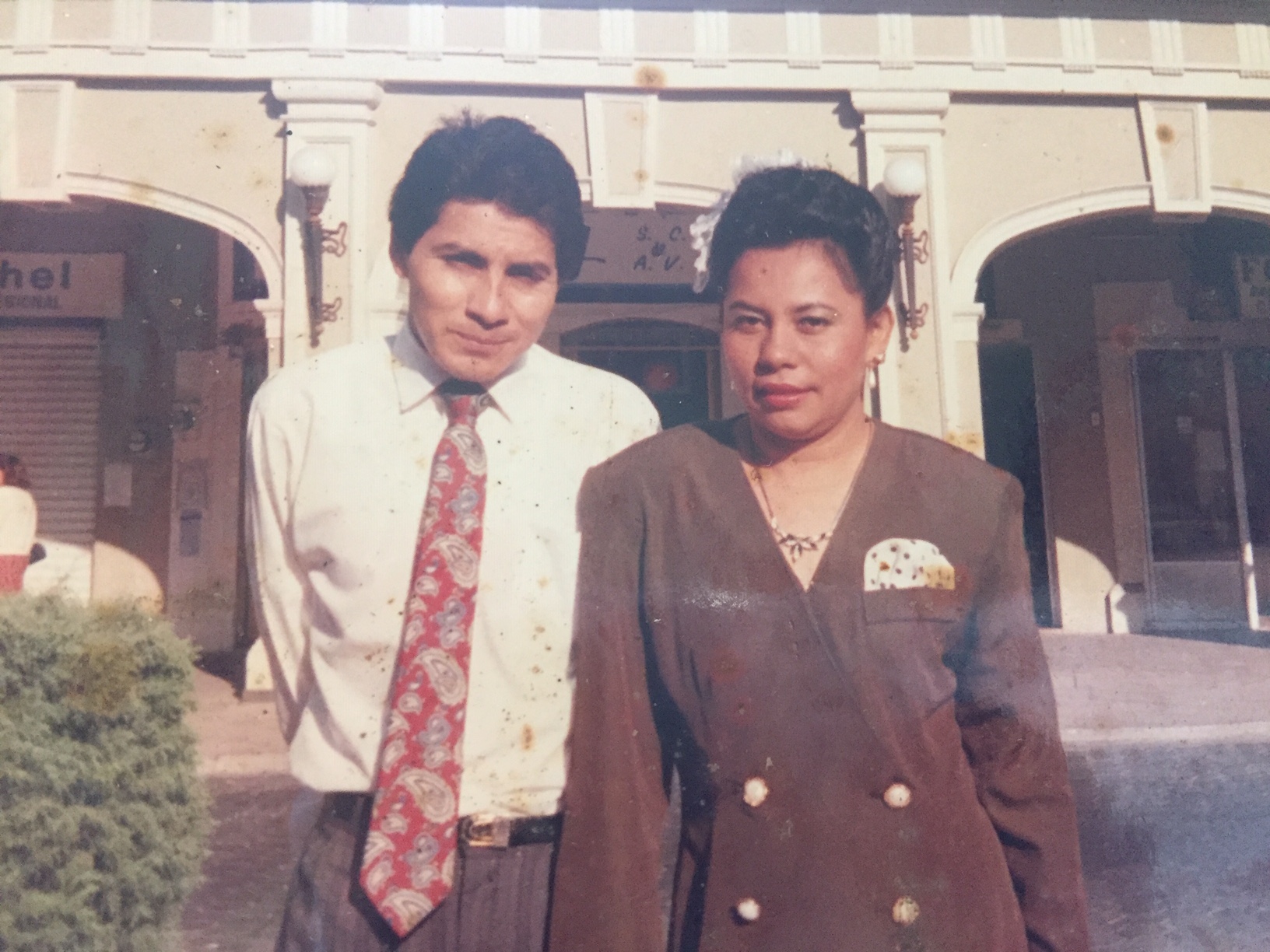 Maria and Mar on the day of their civil wedding.

What made you decide to serve a mission?

While I was attending Institute classes we were studying the New Testament and I was amazed by all that Jesus Christ did to set an example for us and teach us, and to make it possible for us to return to the Father. I asked the Elders if I might be able to go on a mission, but I had to wait for a year. Finally, my call came and I was to go to the Mexico North mission. 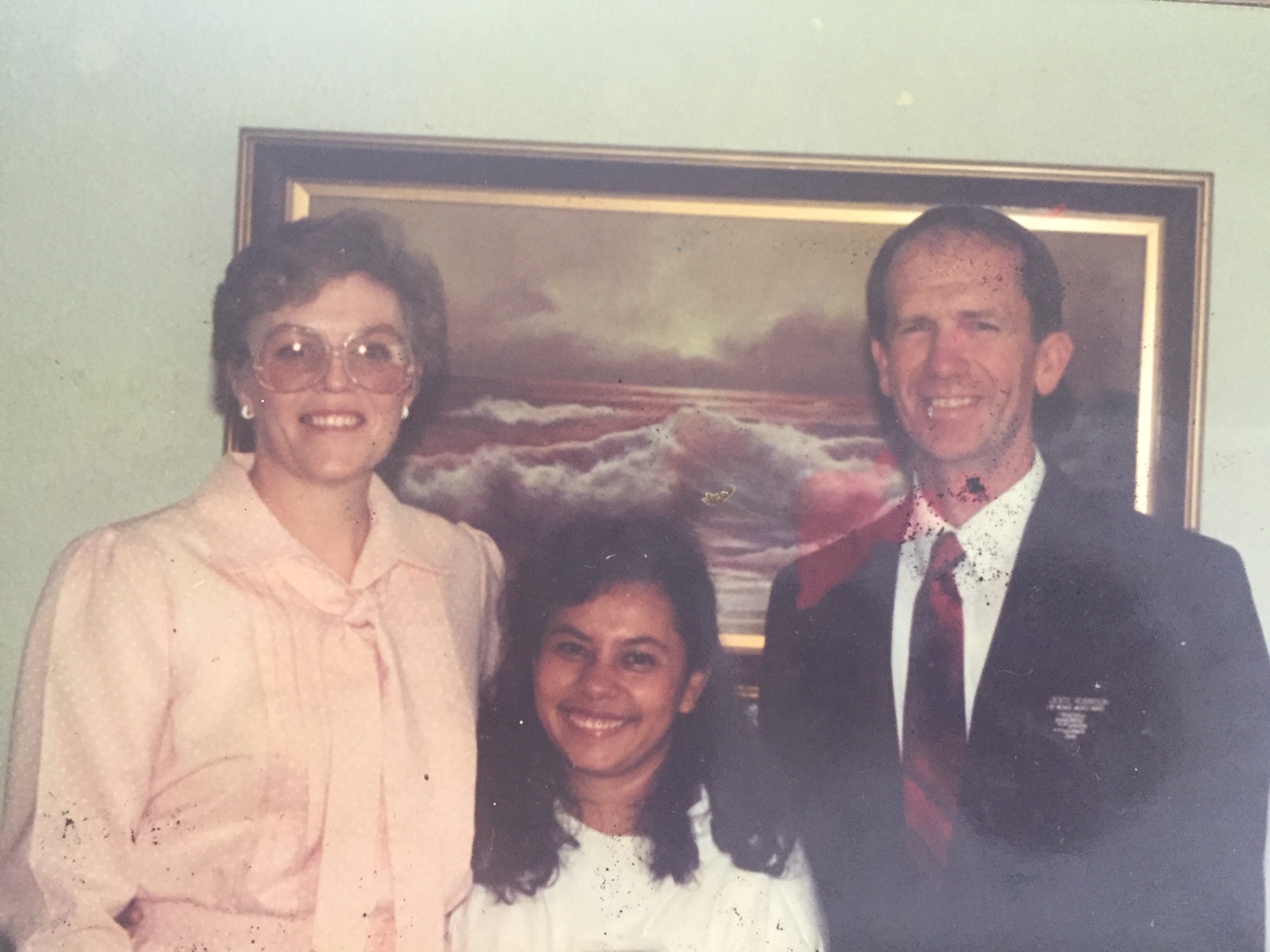 Maria on her mission.

Was that difficult for your family and friends?

One of my coworkers told me she was conspiring to keep me from going! But it was only because she valued me as a coworker. I told her that conspiracy or no I would go, and she threw a dinner to wish me well. I went to Pihuamo, Jalisco to say goodbye to my maternal grandparents. I sat down between the two of them. I told them that for a year and a half I would be serving the Lord. My grandfather, Papa Toño, got up and left the room. Mamá María, my grandmother, hugged me and I said goodbye to her. I had been in the house with them from the time I was five until I finished primary school.

Where did you find the strength to have these difficult conversations with your loved ones?

In my Savior, because he gave everything for me. He paid for my sins and made it possible for me to return to the Father. And because of my love for my grandparents. They took care of us when my father died. Then, when I was on my mission, one of my cousins wrote to me and said, “I don’t know if your mission is more important than your mom—she is sick.” I talked to my mission president and he said, “Do what feels right, Hermana García.” I asked my Father in Heaven and made the decision to end my mission. I went home and my mother’s health improved.

And after you returned?

I started working in the school again. My maternal grandmother was baptized when I returned. As a district we were preparing a choir for a conference and it was there that I met Mar. He was the one who cleaned the district chapels. I saw him and admired him. He had Rheumatoid Arthritis and he walked with difficulty. I saw what an effort he made to clean the churches. He saw that as soon as choir practice ended, I would quickly leave to get home. One of these times he followed me to the place where I took the bus and asked where I was going. I had to travel to Coquimatlán, which meant that I had to be there before 10:30, because it was the last bus. Sometimes it took up to an hour to make the trip.

After that conference I didn’t see him again because I attended a house of prayer. Later, they had to close that house of prayer because the owners sold it.  We switched to going to the Magisterial chapel, which was where he attended. When he realized this, he would stay for my church services after his had finished. I was serving as the Primary President in my branch and one day we had the children in the baptismal font room. He stood in the door where I was going to leave and invited me on our first date.

We were married civilly on the 17th of March and that night we left for Mexico City to be sealed in the temple on the 19th of March, 1993. In April we found out we were expecting our first child. Mar had to go to Mexico City to have his knee operated on in July. While he was recovering, we were reading the scriptures together and we picked out the name Irad Lehi. In December, only a few days after Irad was born, Mar had to have a second surgery on his other knee. Luckily, the room when he was staying had a window. They pulled his bed over in such a way that one of his brothers could hold up Irad and he was able to see him from far away. 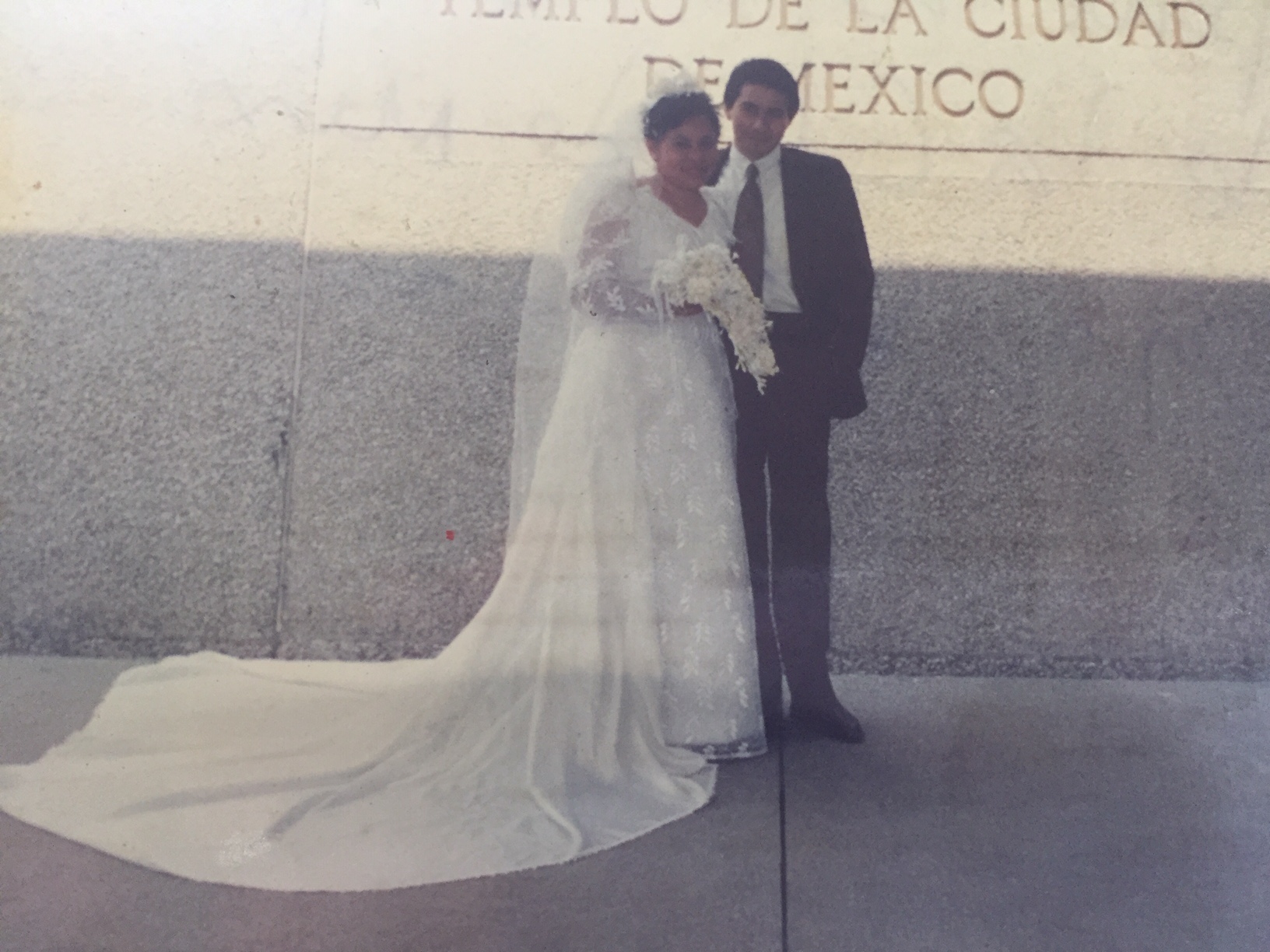 Maria and Mar on the day of their temple sealing.

Were you able to work again to support your family?

Yes. I asked for a leave of absence without pay for six months and I ended up having to leave for a year. But the district president at the time was a lawyer and helped to go through some union channels and renew my permission. My mom cared for my children and my grandparents. Our second daughter was born in 1995. I tried as best I could to support the pain, because my husband wasn’t there to accompany me. Finally, I couldn’t stand it any longer and called a taxi. I was just getting in when he got home. He also got in and we went to the ISSSTE hospital. They took me to the operating room and the doctor wasn’t even able to get her gloves on in time.

Were you afraid to have more children after such dramatic births?

We didn’t expect Pahoran or Job, but when we realized they were coming, we considered them blessings, and that’s how it’s been. Paho served a full-time mission and the Lord continues to bless him, and Job, when his father could no longer drive, was able to drive us to appointments. Job had to quit his last quarter of high school in order to help us at the end of his father’s life. I know the Lord makes a way. As Nephi said, “I know that the Lord giveth no commandments unto the children of men, save he shall prepare a way for them that they may accomplish the thing which he commandeth them” (1 Nephi 3:7). 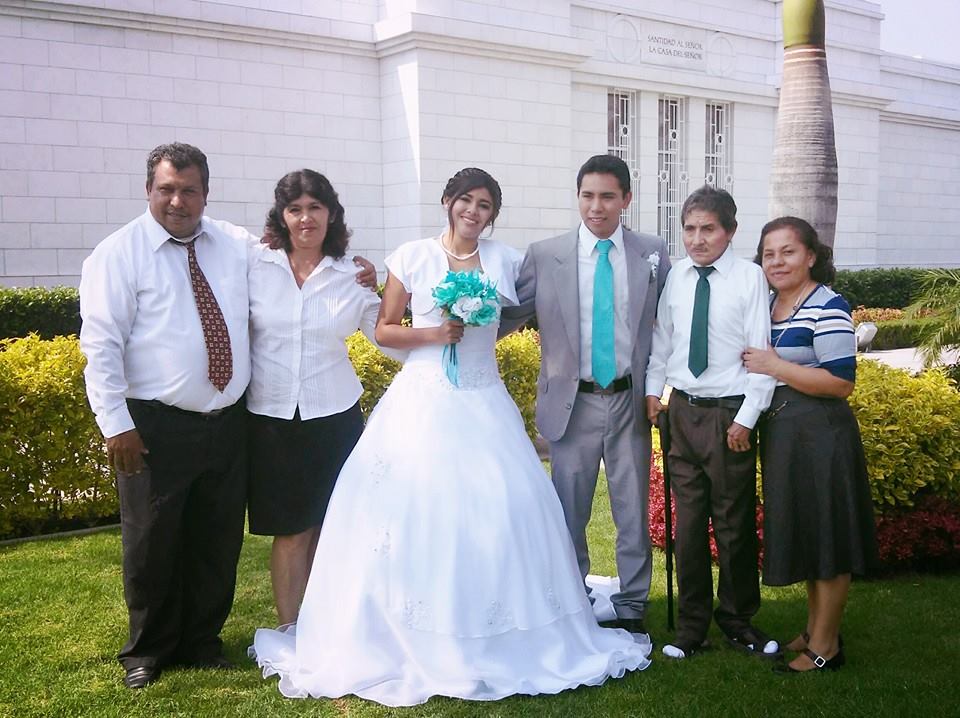 Maria at the wedding of her son Irad.

And how is it that your brother Quique came to live with you?

When Job was born, my mother was ill. He was born in January and my mother died in July of 2001. From that point Quiqui has been with us and he has also been a blessing in our lives. He was a companion for my husband at church and at home. They prepared meals and took my children to school. When Job has to leave, to study or whatever God has prepared for him, Quiqui will keep me company. 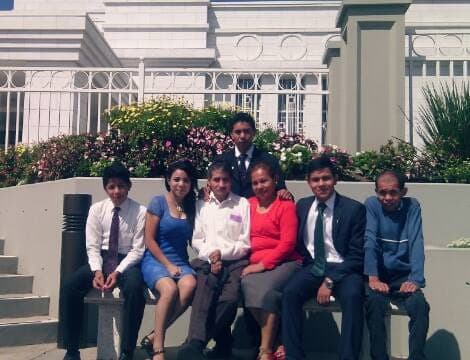 Maria with her family.

It seems that you’ve made the decision again and again to confront difficult things and maintain your positivity, even after the death of your husband.

He taught me bravery and love of family. He would tell stories about each of his brothers and sisters and his parents and always talked about them with love. He was the best father! He was always at their events and get-togethers. He was always in a good mood despite his illness. He was given that illness at the age of 12. It was his companion and he looked for a way to be self-sufficient and not rely on us. My brother always helped him to do things like fix meals when I wasn’t around. This year, when Mar could no longer get up and eat on his own, he said he would need help from me and our youngest son. He managed that way until May, and then could no longer. 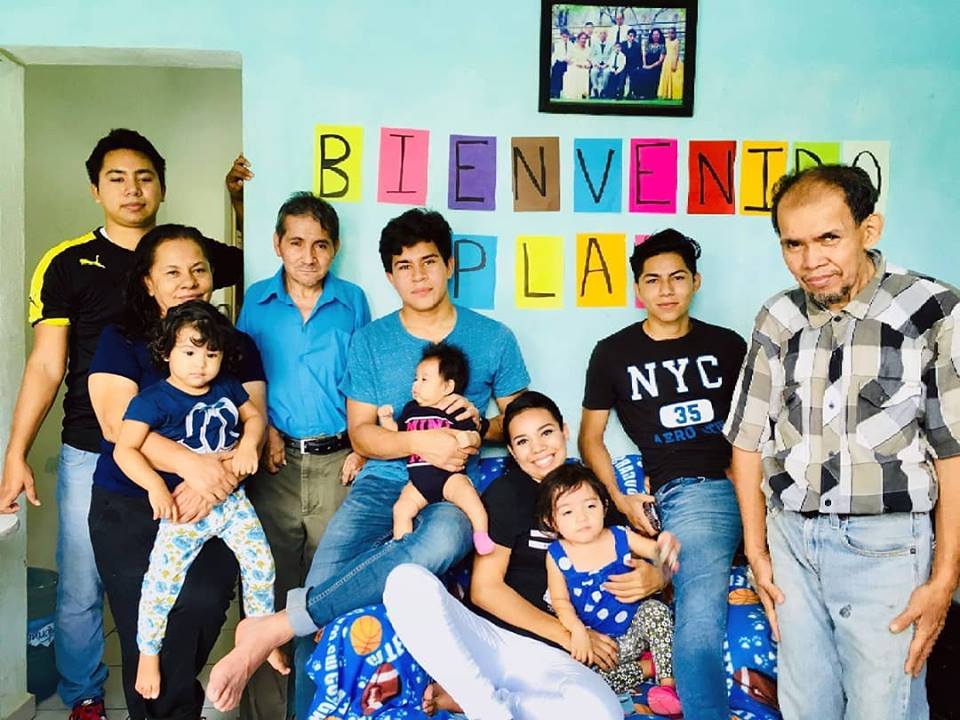 Maria with her family.

It gets easier and easier because of the tools the Church gives us. And in the moment there is fear because we think it’s difficult. But the Lord knows us and knows what we can stand. I can say that my God has always been with me and has placed a way for me to come out ahead. Now, with the death of my husband, I only hope to serve him so that the time won’t feel too long before I can be reunited with him and be judged of the Lord.

In the Church, I help older people in their search for their ancestors. My joy is when we find the documents for a person and the sister begins to talk about the history of that person. You can feel the love she has for her dead loved one, and the things she knows about someone she didn’t know in life, but who has become one of her loved ones.  I have benefitted from the knowledge that God loves all of his children no matter in which era they were born. His wish is that we all return to him and rejoice in what he has done for us. 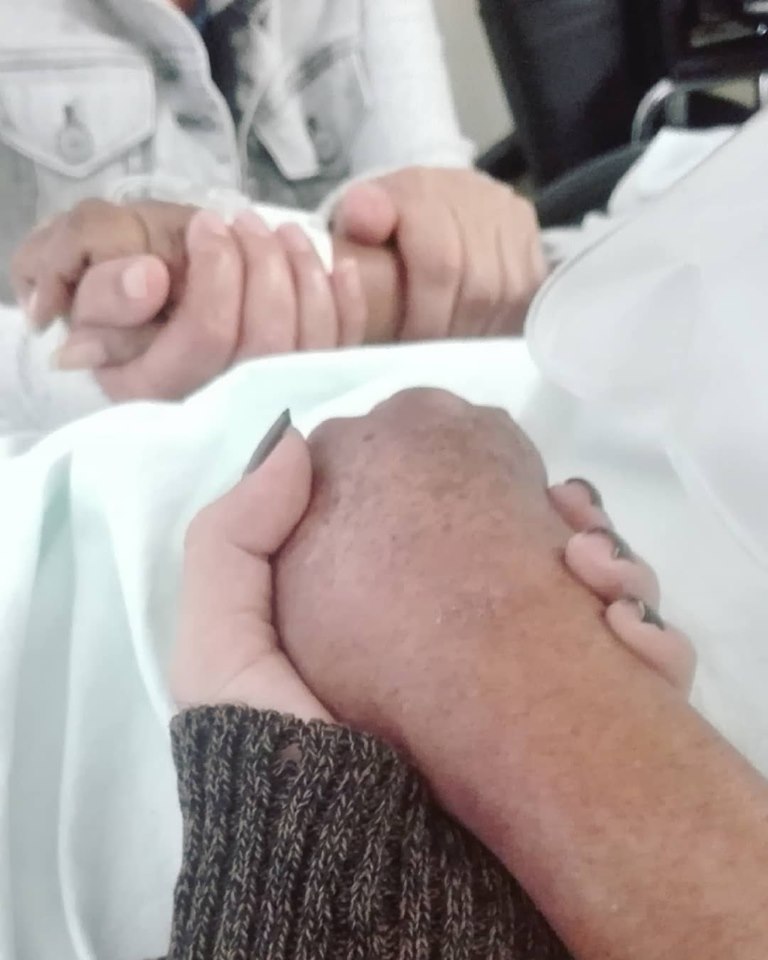 Mar’s last moments with his family.

Favorite Hymn: How Great Thou Art